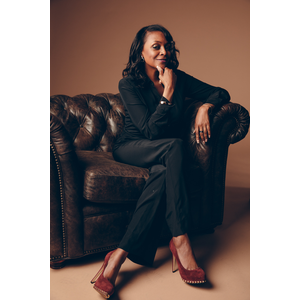 Kenyatta D. Berry is the author of The Family Tree Toolkit and a Contributor to the groundbreaking "1619 Project" published by The New York Times. She was the 2019 Honorary Chair for Preservation Week and was named a "Newsmaker" in American Libraries magazine, a publication of the American Library Association. Kenyatta is an author, attorney, lecturer, podcast host, professional genealogist, and television personality. Her vast knowledge of African American Genealogy, Enslaved Ancestral Research, and DNA has made her an invaluable resource. She has been featured in Black Enterprise, Good Housekeeping, Spartan Magazine, Real Simple, Wall Street Journal, and Woman's World.

Kenyatta's TV Host job on Genealogy Roadshow (PBS) (which received over 1.5 million viewers per episode) is generating enormous buzz surrounding her insight, understanding, and expertise by colleagues, genealogy organizations, experts, media, and supporters alike. Kenyatta was featured on The Real (FOX), revealing the DNA results of the hosts in a segment entitled “Who Am I?” The videos of this segment have received over 9.5M views on YouTube.

As demand grows for people to learn more about their lineage, Kenyatta continues to innovate, transforming the world of Genealogy and making it accessible to the masses.