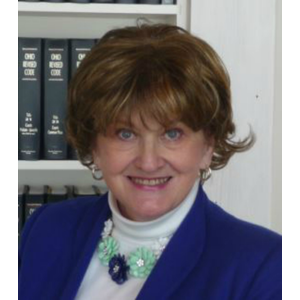 Peggy Clemens Lauritzen, AG, FOGS, has an amazing ability to bring laughter into the lives of her audience members.  One of her favorite photos is a picture of her mother on her way to a church picnic, then on to an afternoon of cemetery transcribing.  It was taken just four days before Peggy was born!

Having grown up with parents that were deeply involved in genealogy takes her love of family history to a new level.  Some people are amazed that she knew people that were actually born in the 1800’s; her own grandparents.  Listening to the stories from bygone years, touching the fabrics from quilts, dresses, blessing gowns, and bonnets all have added to the admiration of previous generations.

Peggy is a frequent lecturer at many local societies in Ohio, as well as Family History seminars.  She has presented at Brigham Young University, and ICAPGen, and taught Continuing Education classes at several community colleges and The Ohio State University.  One of her proudest moments was achieving the credentials that qualified her to be an Accredited Genealogist, a credential she has maintained for twenty-two years, for it polished her research skills.

She is a featured columnist in Reminisce magazine, has written several Legacy QuickGuides, and has filmed as an instructor for Ancestry Academy.  In 2018, she was honored to be awarded Fellow of the Ohio Genealogical Society, and received the Laura G. Prescott Award for Exemplary Service to Professional Genealogy.  She is a former researcher at Ancestry ProGenealogists.

Recently there have been several requests to speak to corporations, which is new territory for this researcher. It is quite enjoyable as business professionals as individuals are enlightened on a new way to leave a legacy.